What is Bhakti Yoga? Get The Complete Guide

The unanimous verdict of all the scriptures is that Bhakti is the ultimate attainment. Now we need to know the means to attain it.

What are types of Bhakti Yoga ?

You will be surprised to know that Divine Love, which overwhelms even the paramahansas in special ecstasy, is not something that can be practiced, nor does it come by itself. Divine Love is actually the name of one of the most intimate powers of God. It is he alone who possesses this Divine Power.

There is no price that can be paid for this priceless attainment. The Ramayana clearly states,

“The greatest sages and yogīs seek Divine Love, but it is attained only by some rare fortunate souls, and that too, only through Divine Grace.”
The pre-requisite for attaining Divine Grace is Sādhanā Bhati, preparatory devotion. But first, it is important to understand what this Supreme Bhakti, Divine Love is.

What are essentials of Bhakti Yoga

In the Chaitanya Charitāmrita which contains the life history of Lord Gaurānga, it is stated,

“The Supreme Brahman, Śhri Krishna possesses innumerable powers, of which three are prominent.

Chit Śhakti being internal, intimate power, is the supreme amongst these.

This fact has also been mentioned in the Vishnu Puāna,

The Hlādinī Śhakti surpasses the other two powers in sweetness. It is because of this power that God remains ever blissful even while creating innumerable material universes and maintaining a record of each individual’s actions.

In a worldly family consisting of perhaps 5 to 10 people, even a husband and wife cannot get along without being upset with each other. They always remain disturbed by frictions that arise between them, several times a day.

The absolute essence of this Hlādinī Śhakti is Divine Love or Bhakti. To summarize, of all the innumerable powers of God, three are foremost:

From among these three, Svarūpa Śhakti is supreme, and it consists of three aspects:

Of which Ānanda is foremost.

Why wouldn’t God come under its control? This is why the Rasika Saints when they came face-to-face with God, have asked for this intimate power, Divine Love. Even though the Lord stands personally before them, they do not ask for God himself.

They only desire Avirala Bhakti , Nirbhara Bhakti, Para Bhakti, or Premā Bhakti. These are all different names for Divine Love, which God very reluctantly gives to a devotee. Nevertheless if a devotee absolutely insists, He is bound to give it.

How can we do Bhakti Yoga?

Bhakti is not attended through practice, nor does it come by itself. Some people are constantly engaged in efforts to attain that bhakti or divine love on the strength of their own spiritual practise, while some sit back and do nothing, on the pretext that

Both of them are wrong. Devotion can never be attained through spiritual practice alone nor through being indolent.

The Vedas state that one has to practise devotion in order to attain God’s Grace. It is only then that one will receive his most intimate power, Divine Love.

We have to practise devotion in order to attain supreme bhakti which comes only through God’s Grace. The Ramayana mentions the following condition for the devotion that has to be practised by us,

“To attain God’s Grace practice devotion with sincerity, abandoning all deceit and worldly desires.”
This is a prerequisite to attaining Divine Love, the essence of Hlādinī Śhakti.

Types of Bhakti Yoga in detail

There are three main points to be understood from these verses. Firstly, one should be devoid of all desires. Secondly, bhakti should not be assisted by karma, jñāna, tapaśhcharyā or other means. Thirdly, one should actively serve Lord Krishna by favourable things of devotion through the relationship of śhanta bhāva, reverence, dāsya bhāva, servitude, shakya bhāva, friendship, vātsalya bhāva, parenthood, and mādhurya bhāva, amorous love.

The first point requires serious study and reflection, because in my Guru’s ( Shri Kripalu Ji Maharaj ), it is the reason for our failure to practise devotion, and is the greatest impediment that blocks our progress. Once this is understood, the path of Bhakti will be smooth and we will speedily progress towards our goal.

Devotion is possible only when all kinds of desires are abandoned. In reality, it is the mind that has to practice devotion because the mind alone is the cause of bondage and liberation. If the mind is preoccupied with the desires for worldly or celestial attainments, how can you possibly engage it in devotion?

You have only one mind. You can either have desires for material attainments, or a desire for the divine. It is totally impossible to have both kinds of desires simultaneously in one mind. Most people who believe in God never seriously reflect on this point, but it definitely needs serious consideration.

Bhakti should be devoid of desires

What are the various kinds of desires that need to be abandoned in preparatory devotion? The simplest and most satisfactory answer to this question is, any desire apart from the desire for Lord Krishna.

The desires that have to be abandoned are of four types:

The first three- dharma,artha and kama together are also referred to as bhukti because they relate to the material realm, moksha or liberation which is a divine attainment is referred to as mukti.
In short, we have to abandon two kinds of desires, ‘bhukti’ and ‘mukti’.

Some people may find the renunciation of the second kind of desire, mukti, to be quite puzzling. To renounce all material pleasures attainable up to the abode of Brahmā is understandable, but to renounce Mukti or liberation seems quite strange. Listen to what Rasika saints declare,

“ So long as the two witches in the form of bhukti and mukti reside in the heart of individual soul, the supreme goddess of devotion cannot manifest herself.”
Between the two, bhukti and mukti, the which called bhukti is not as dangerous as the witch called mukti, because it is possible to be free from her clutches.

If a fortunate soul happens to meet a Rasika Saint, surrenders to him, and practises devotion, he can experience the nectar of Divine Love.

On the other hand, if anyone falls into the clutches of the witch named mukti , he attains liberation and merges into Brahman.

Then there is absolutely no chance of his experiencing the nectar of Divine Love, because once liberation is attained, it is attained forever. There is no question of experiencing duality again.

You might point out that, there are examples of millions of paramahamsa such as Sanaka, Sanandana, Janaka and others, who became Rasika saints and enjoyed the Bliss of Divine Love.

The reason is that, as long as the paramahamsa is in physical body, he does not merge in God. It is only when the body is given up, that he merges into Brahman.

There after he cannot assume a body, and without a body, it is impossible to experience the bliss of Divine Love. Thus, the which mukti is obviously worse than bhukti. So, desires up to and including the desire for liberation have to be abandoned.

It is often seen that even before starting spiritual practice people have countless desires in their hearts which they place before God and call themselves selfish devotees, sakāma bhakta and expects God to fulfil their desires. Such people are merely selfish and not devotees. This is not the definition of a sakāma bhakta! A sakāma bhakta is a ‘devotee’ who has practiced devotion to God.

People who have only worldly desires and claim to be sakāma bhakta are only selfish and not true devotees. These people with selfish material desires can in no way be compared to examples of sakāma bhakta, like Draupadi, Gajarāja and the others.

Devotion, which is practised while harbouring material desires has many dangers.

If your goal is to attain happiness, then going to God, Who is the source of happiness and asking Him for the world which is a source of misery, evidently implies that we still have hopes of getting unlimited happiness from this world.

When our goal itself is not right, then we can practise devotion, let alone attain perfection? Worldly things simply add fuel to the fire of material desires.

In addition, false pride increases on achieving them. This is the main cause for our turning away from God.

Thus a person will be a believer as long as he acquires worldly possessions, and when he is deprived of them, he will become an atheist. Therefore, it is in the best interest of a spiritual aspirant to totally renounce all desires for material objects in devotional practice.

To repeatedly ask for the world where there is no happiness, where fulfilment of desires results in the emergence of more formidable desires, only brings about harm.

It is only when we ask for a vision of God or Divine Love that the root cause – desire its self will end forever and the individual soul will become completely fulfilled.

But all this is only imagination. People just lie that God fulfils their every desire, because they ignorantly think that any benefit received as a result of one’s destiny is due to God’s Grace.

There is some benefit in this belief because the individual realises God’s Grace on this basis. But the harmful consequence of this belief is that, when the material desires are not fulfilled, this faith in God immediately disappears.

We read in the scriptures about the untimely death of Daśharatha, the father of the All Powerful, Almighty Personality, Lord Rāma. But Lord Rāma did not save him.
Abhimanyu, the nephew of Lord Krishna and the son of Arjuna, could not be saved from an untimely death by both these great personalities together. Surely we don’t think ourselves to be greater than Daśharatha and Abhimanyu ! Then why do we expect that the irrevocable divine law governing destiny will be broken for us?

Besides these, there are countless other hindrances that arise with material desires which prevent you from practising devotion, or surrendering to a Saint. If this happens, how can you progress spiritually? So, all desires including the desire for moksha, is known as Mukti or liberation must be renounced. We should only desire what is truly in our self-interest and that is selfless Divine Love for God. 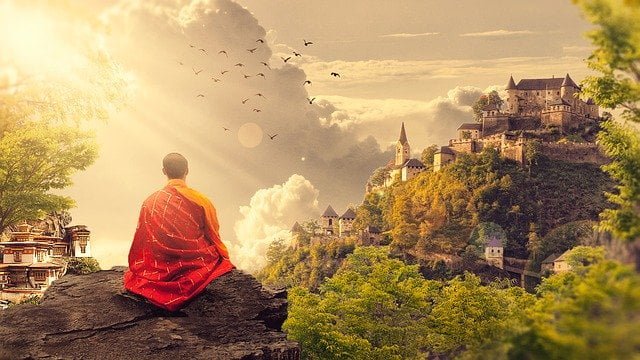 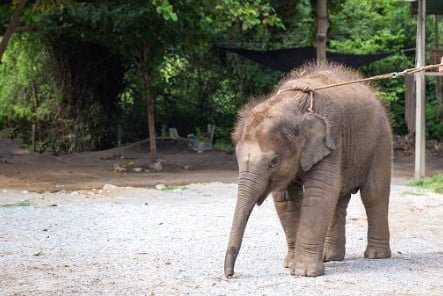